Why are you receiving this notice?
The City of Wasco (the “City”) is mailing this notice to you because you are a utility customer of record directly liable for payment of water or sewer service fees or are the property owner of record that receives these services. This notice describes proposed rate changes to be assessed to recover the cost of providing water and sewer services to City customers and provides a notice of a public hearing to be held on December 20, 2022, regarding these proposed changes. At the public hearing, City Council will review the amount of the proposed rates as well as the methodology used to calculate the rates and assign rates to customers.

Monthly utility service fees are the primary source of revenue used to pay for water and sewer operations that provide services to customers. Expenses for those services include but are not limited to, operations and maintenance, major and minor capital improvements, administration, as well as costs related to prudent long‐term operational, capital planning, and financial management of the systems. Financial management would include maintaining adequate fund reserves and planning for contingencies.

The City’s current water rates consist of a minimum fee that includes a base allotment of water plus a volume rate for water used over the allotment. The cost of the minimum fee and the amount of water included in the allotment vary based on customer type (residential, multifamily, irrigation, etc.). Over the allotment, all customers pay the same rate per unit of water consumed. Water usage is billed based on units of hundred cubic feet (ccf). One ccf equals 748 gallons.

It is proposed that the City keep the same concept of a minimum fee plus a volume rate but decrease the amount of water included in the minimum fee over the next five years. The vast majority of residential water use is within the base allotment (about 90%) and very few residential customers are billed the volume rate. By decreasing the water allotment for all customers, the City will encourage conservation and more fairly bill lower water usage customers who don’t use all the water in the allotment. Senate Bill (SB) 606 / Assembly Bill (AB) 1668 require water purveyors to achieve average indoor consumption of 52.5 gallons per day (gpd) per capita by 2025 and the ultimate target is 50 gpd per capita by 2030. At the end of the 5‐year rate plan, the City’s water allotment will roughly equal the statewide indoor water usage target for single family residential customers. The water allotment for non‐residential customers is also proposed to gradually decrease and eventually equal typical efficient indoor usage.

A schedule of drought rates is also proposed to be adopted by the City. Drought rates would only be implemented by City Council if the Governor declares a water shortage emergency. Under drought conditions, the minimum fee and usage allotment would remain the same, but water use above the minimum allotment would pay a higher rate. 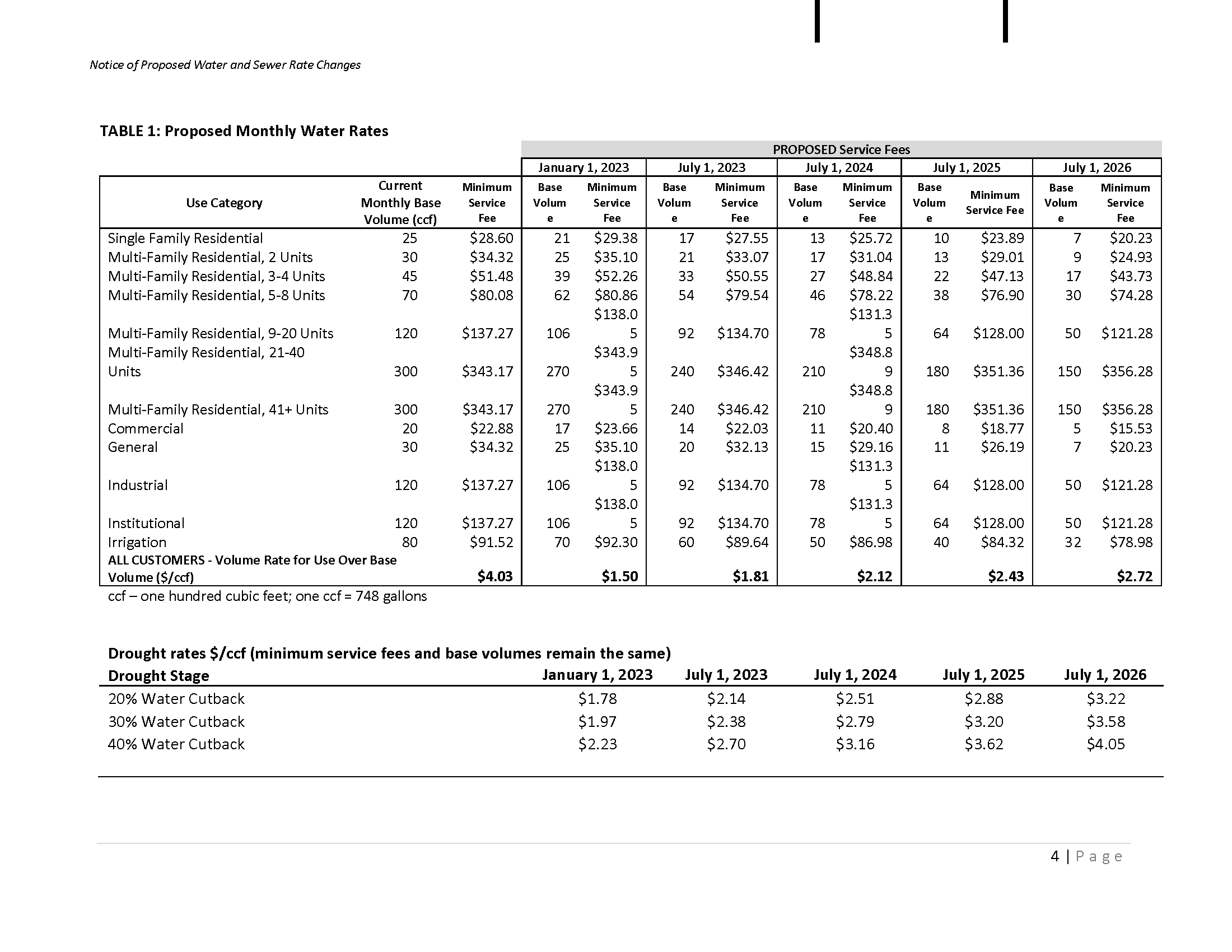 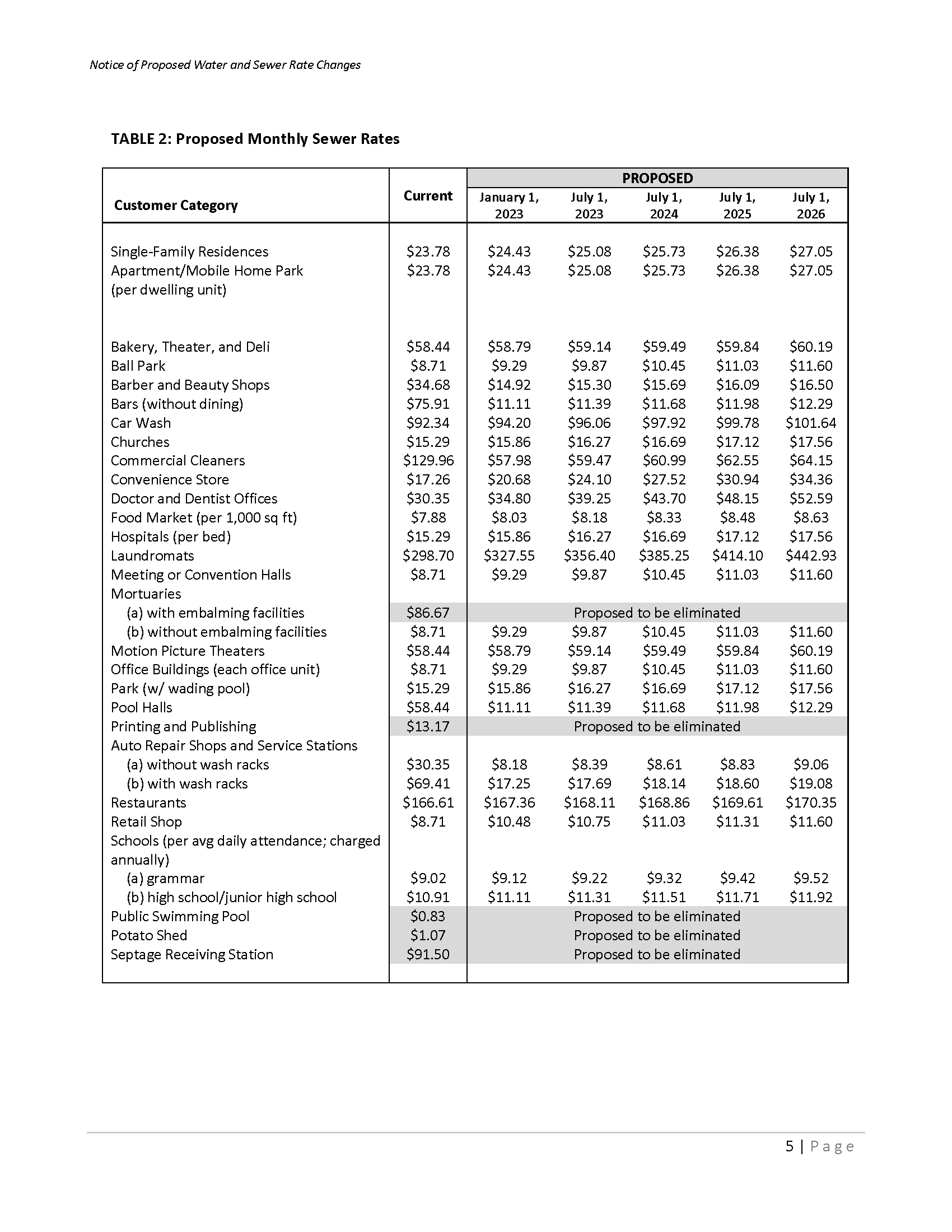 How do you file a protest or participate in the public hearing?

The provisions of Proposition 218 provide that certain types of “Property Related Fees” such as water and sewer rates are subject to a “majority protest” process. If protests are filed on behalf of a majority of the parcels subject to the rates the City cannot adopt the proposed rates. Under the majority protest process, any property owner of record or customer of record may submit a written protest for the proposed increases; provided, however, that only one protest will be counted per identified parcel.

Every written protest MUST include ALL of the following to be counted:

Protests shall not be counted if any of the required elements above (1 through 4) are omitted.

Written protests may be submitted to the City Clerk by:

Please identify on the front of the envelope for any written protest, whether mailed or submitted in person to the City Clerk, that the enclosed protest is for the Public Hearing on the Proposed Rate Changes ‐ Water and Sewer Service.

If you have any questions about the proposed rate changes or would like to see more information about data used for the rate study, please contact the City Clerk at 661‐ 758‐7215 or by email at cityclerk@cityofwasco.org  during normal business hours. Additional information and documents related to the proposed rate changes can be found on the City of Wasco’s website at www.cityofwasco.org