A solution to Wasco’s long-running conflict with the high-speed rail project may be in sight. On Friday, November 19, 2021, the California High Speed Rail Authority (HSR) announced receipt of a $24 million grant from the US Department of Transportation. The grant is labeled “Wasco SR 46 Improvement Project”, awarded to the California High-Speed Rail Authority. You can find a summary HERE (PDF).

A total award of $24 million was issued by “RAISE”, the Rebuilding American Infrastructure with Sustainability and Equity program. The grant will help fund part of the $75.6 million State Route 46 improvements in Wasco including additional traffic lanes, pedestrian routes and a roundabout to ease congestion. To facilitate this project, the contractor(s) will need a substantial lay-down yard for materials and equipment.

HSR has indicated the former Farm Labor Housing Camp, south of 6th Street between H Street and J Street is the preferred site of a construction lay-down yard. Once HSR and SR 46 improvements are complete, the site can be put to use for industrial economic development – bringing jobs and revenue to the City.

Wasco Mayor Gilberto Reyna stated: “This grant will allow our city to resolve a multi-year issue finally without a negative effect on our budget. I thank all involved in achieving this outcome. Today Wasco’s future shines brighter. Congratulations, Wasco!”

City of Wasco and HSR staff have already begun discussions on how to move quickly forward on cleanup efforts. Wasco City Manager Scott Hurlbert commented: “The City of Wasco is very pleased with this announcement. It is the result of a lot of hard work by City and HSR Staff, and a great example of multi-agency teamwork recognizing significant local needs. This funding will resolve a tremendous financial burden for the City and help us move our community forward with confidence.”

Wasco, CA – The City of Wasco has been engaged with the California High-Speed Rail Authority and its contractor regarding the high-speed rail project for most of the last decade. The high-speed rail will travel through Wasco alongside the existing BNSF railroad tracks. The City has been involved in every phase of this project as it has unfolded, mindful of the impact it would have on the City and our residents.

Due to all units being vacant, vandals were constantly vandalizing the units from the Former Wasco Farmworker Housing Authority .
On January 11, 2020, a Graffiti Abatement was coordinated by the Wasco Sheriff’s Activities League Members along with City Council Member Reyna and Kern County Sheriff Deputies from the Wasco Substation painting over all the graffiti that was present at the location. See pictures below: 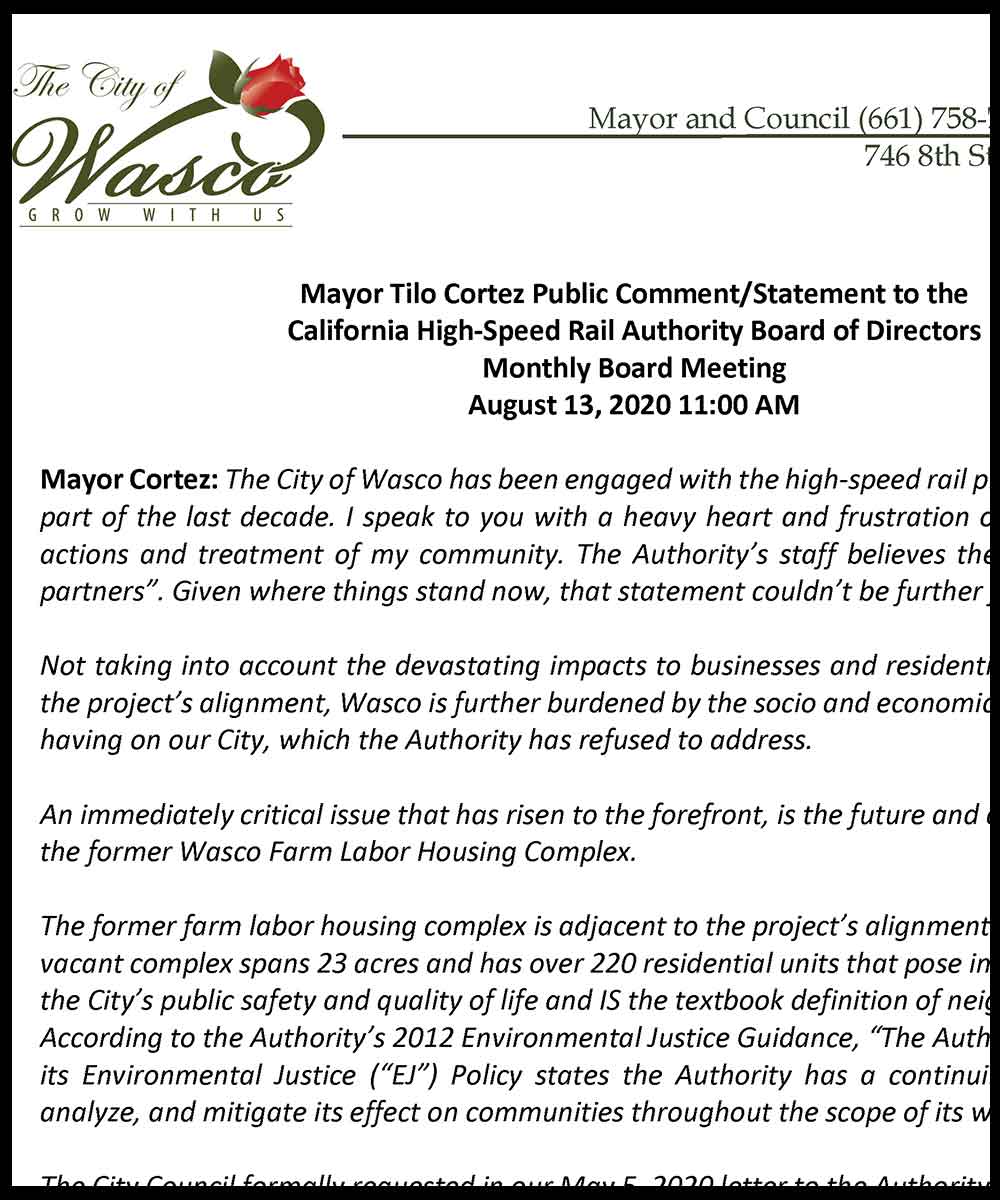