"We are committed to a purpose greater than ourselves. What we do makes a positive difference and leaves a proud legacy. We Serve together through these values."TrustWe build trust by providing excellent service, honoring it through accountability and effective communication. RespectWe act with kindness and empathy; embracing diversity and inclusion.IntegrityWe are honest, ethical and do the right things for the right reasons.TeamworkWe are a caring workplace made up of a team working towards a shared purpose. We collaborate support each other.OwnershipThis is our City, we are invested and dedicated to its continuous success. We take pride in all we do.InnovationWe are progressive thinkers who embrace the challenge of continuous improvement. 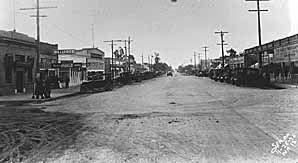 The history of Wasco dates back to 1897, when the Santa Fe Railroad laid tracks through the area. During the next several years, over 300 families relocated to the area primarily through arrangements made by Marshall V. Hartranft. Hartranft secured nine 640 acre sections from the Kern County Land Company for resale to those settlers, and he is therefore credited with inception of the new community. Hartranft’s effort in bringing settlers to Wasco was titled the “Fourth Home Extension Colony.”

The town of Wasco was originally named “Dewey” and then “Deweyville.” When William Bonham, a settler from Wasco County in Oregon, determined there was a town already named “Deweyville”, he proposed the area be renamed “Wasco”, and in 1900, the Post Office recorded the town name of Wasco.

By 1904, two schools united under the name, “Delta-Shamrock School.” The Delta building served a multi-purpose function as the school and as an educational/civic center for settlers who arrived in 1907. The school was eventually renamed “Wasco” and in 1919, when combined with the Elmo District, it became the Wasco School District.

Land was distributed to the new colonists on February 7, 1907. Wasco’s business district consisted of a depot, general store, post office, two saloons, a blacksmith shop, and a hotel. Among settlers in the early 1900’s was A. V. Bennet. He farmed alfalfa and launched a dairy business. Bennet subsequently introduced the area’s first milk distribution service by delivering the bottled product to customers in Wasco and Lost Hills.

The community’s first church was organized in 1907, along with King Lumber Company and the Wasco Improvement Club. Among the Club’s itinerary was the planting of shade trees, and the purchase of firefighting equipment. The first edition of the Wasco News was published by John L. Gill on November 11, 1911, and in 1919, the American Legion organized Wasco’s first volunteer fire department.

Fresh vegetables, meat, ice, and fuel wood was initially imported from locations including Pond, Delano, Hanford, and the mountain areas. Water was a primary concern, and subsequently caused the development of the Fourth Extension Water Company - an organization established to supply water for domestic and irrigation purposes.

Agriculture has always been Wasco’s primary economic base. In 1916, long white potatoes, destined to be the root of Wasco’s economy, were planted.

Incorporation as a City

Cotton was introduced in 1918 and the city was incorporated in 1945.

For more information regarding Wasco’s history please contact the Wasco Historical Society at 661-758-8948 or visit their museum located at:
918 6th Street
Wasco, CA 93280